Learning the Basics of Dementia 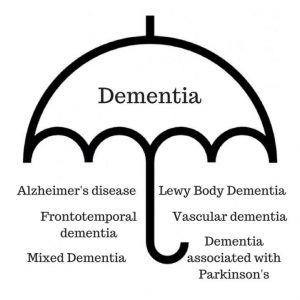 One of the most frequent questions I receive from families, caregivers, or person with memory loss is “What is the difference between dementia and Alzheimer’s disease?” This concept can be a little confusing, especially in the midst of a recent diagnosis.  This article will help explain this common question, as well as go into some basic information about Alzheimer’s disease and other types of dementia.

Alzheimer’s is a progressive dementia, meaning that a person’s functioning declines over a number of years. Although the disease is highly individual, on average, Alzheimer’s can last between 10-12 years.

Alzheimer’s itself has several key warning signs/symptoms that a person may notice in the early stages of the disease before diagnosis. Close family and friends may also notice some of these symptoms and encourage their loved one to see guidance from their physician or a specialist such a neurologist or geriatrician. Although Alzheimer’s disease affects each person individually, there is a common set of warning signs. If you or a loved one are experiencing any of the warning signs below, it is a good time to see a specialist to determine a specific diagnosis.

Both Dementia with Lewy Bodies and Parkinson’s disease dementia are classified under the category of Lewy Body Dementia. In addition to the impairment of cognition, there may also be physical changes such as tremors and movement challenges. Hallucinations are also a common symptom associated with these types of dementia.

Vascular dementia is typically caused by cardiovascular disorders such as stroke or other chronic conditions that affect blood flow to the brain. Symptoms can often depend on where damage occurred in the brain due to reduced blood flow.

Frontotemporal dementia (FTD) is marked by degeneration in a person’s frontal lobe of their brain. There are three main types of frontotemporal dementia that have different main symptoms. The first is behavior variant FTD which presents primarily as changes in behavior and personality. The second is primary progressive aphasia which affects language and communication. The last type of FTD is disturbance of motor function that can be present with or without the behavior variant and primary progressive aphasia types. FTD primarily affects adults in their 40-60s, but can occur throughout the entire life span.